The aim of this project is to create a working airsoft sentry gun that can be used in a CQB and forest skirmish. I also have been meaning to build a Portal sentry gun so combining the two seemed like a great idea. The final design is inspired by the Portal turret, not a copy of one. 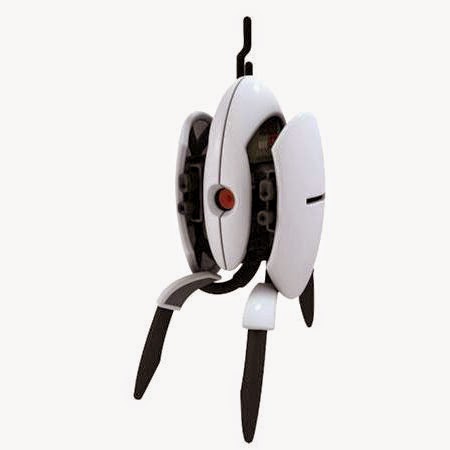 The Design
This was certainly the hardest part. It is very easy to design a turret on paper, much harder to design and build something that will survive out in the field.
The top priorities were, simplicity, reliability and portability.
There would be no point in creating a great looking gun for it to fall apart when it was shot at by players: likewise there would be no point in filling it with lots of fancy electronics, motion tracking and gadgets if they were to fail the first time it rained.
My final design should work, although it has not been field tested yet so time will tell. I have no doubt that I will be back into the workshop with this gun once it has been out for the first time.
The Design I decided on in the end was very simple and should have some real skirmish applications.
The gun, a Modified G36C, will fire 1000 rounds before it needs more ammo. The gun tracks slowly left and right. The operator can see through the guns camera mounted at the top of the turret. When the operator sees an enemy they press the fire button. The gun will continue to track left and right sending out a fan of BB's. There is no tilt action of the gun, what is the point. It will be up to the engineer when they set the gun up to target it in terms of range and what the turret will protect. The wireless range on the system should be about 100m so fine for any airsoft game.
At the base of the gun is a round target plate about 12cm across. If this plate is shot by the opposite team the gun will shut down for a timed period(time is programable). After the time is up the gun powers up again. The opposing team will have to get to the gun while it is powered down and shut it down via a switch on the back preventing it from powering up again, simple really.
The engineer will have access to the gun fire control and the screen so they can see images from the gun.
There were lots of things that I wanted to add to the gun but I am not sure they are really needed. Colour and motion tracking work fine in the studio but do not worked reliably outside in the woodland landscape. Tilt action on the gun as I said is pointless as the gun will fire over 30m. Radio control of the gun was considered and I might add a remote control over ride at a later date if players think they need it.
The gun, as well as being painted in bright colours will light up to define its presence. This will also make it clear when it is disarmed as all the LED lights will go out.
There are some great ways this can be used in games.

Materials
This was a difficult choice. Weight was always going to be an issue but considering the gun is made in two parts, top and stand, two people will be needed anyway to set the gun up.
The lower box section busing all the electronics is made from 15mm ODS wood. Once painted up and sealed will be very water proof. The sides, wings and most other panels are made from 3mm Alloy, which should easily withstand all the hits it will take. In front of the camera will be ballistic plastic.
Again, time will tell if the design will hold up to the riggers of the Skirmish and the british weather.
The design should be easy to manage with gloves and assemble in the field. 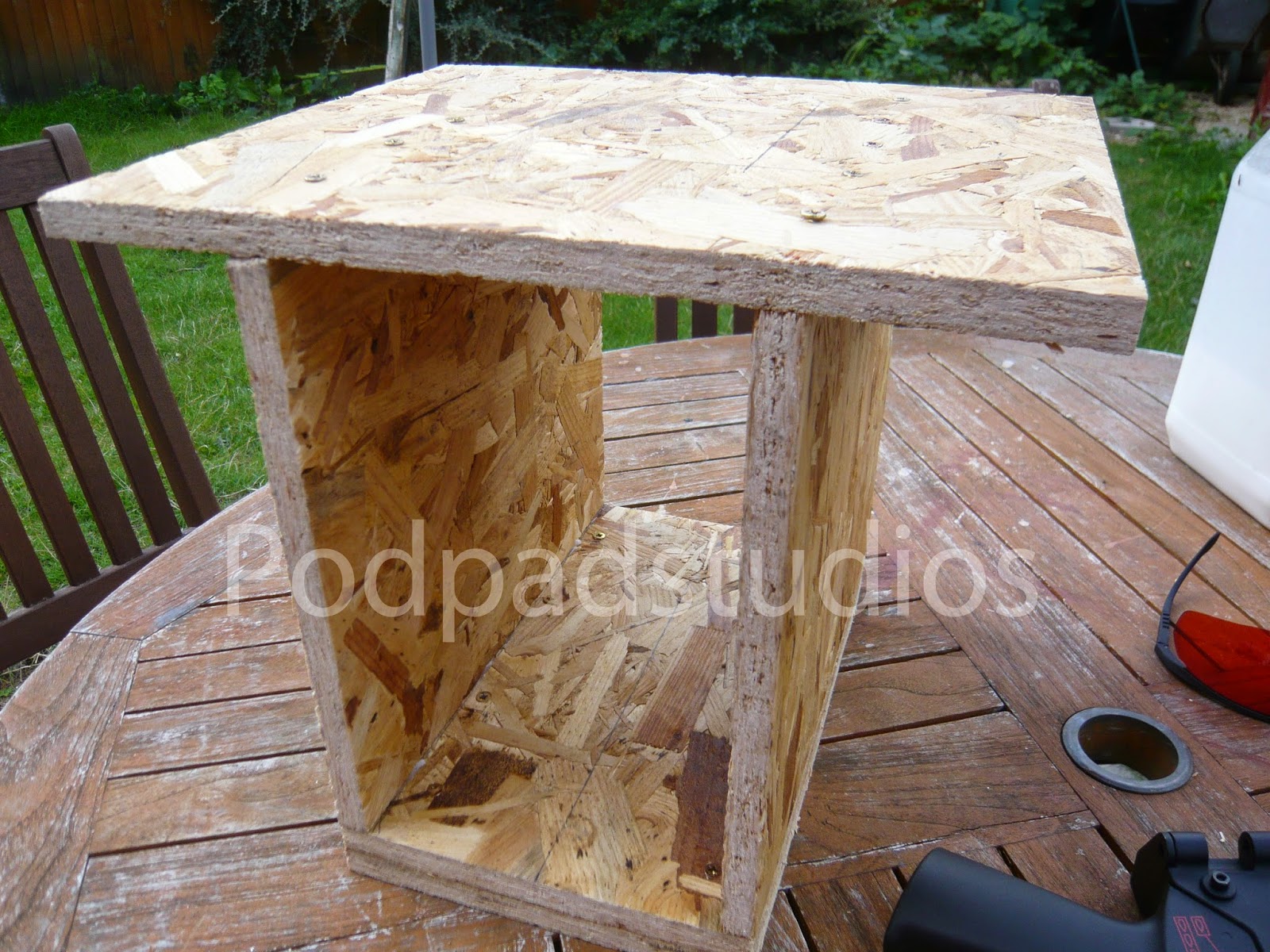 Electronics box had from wood 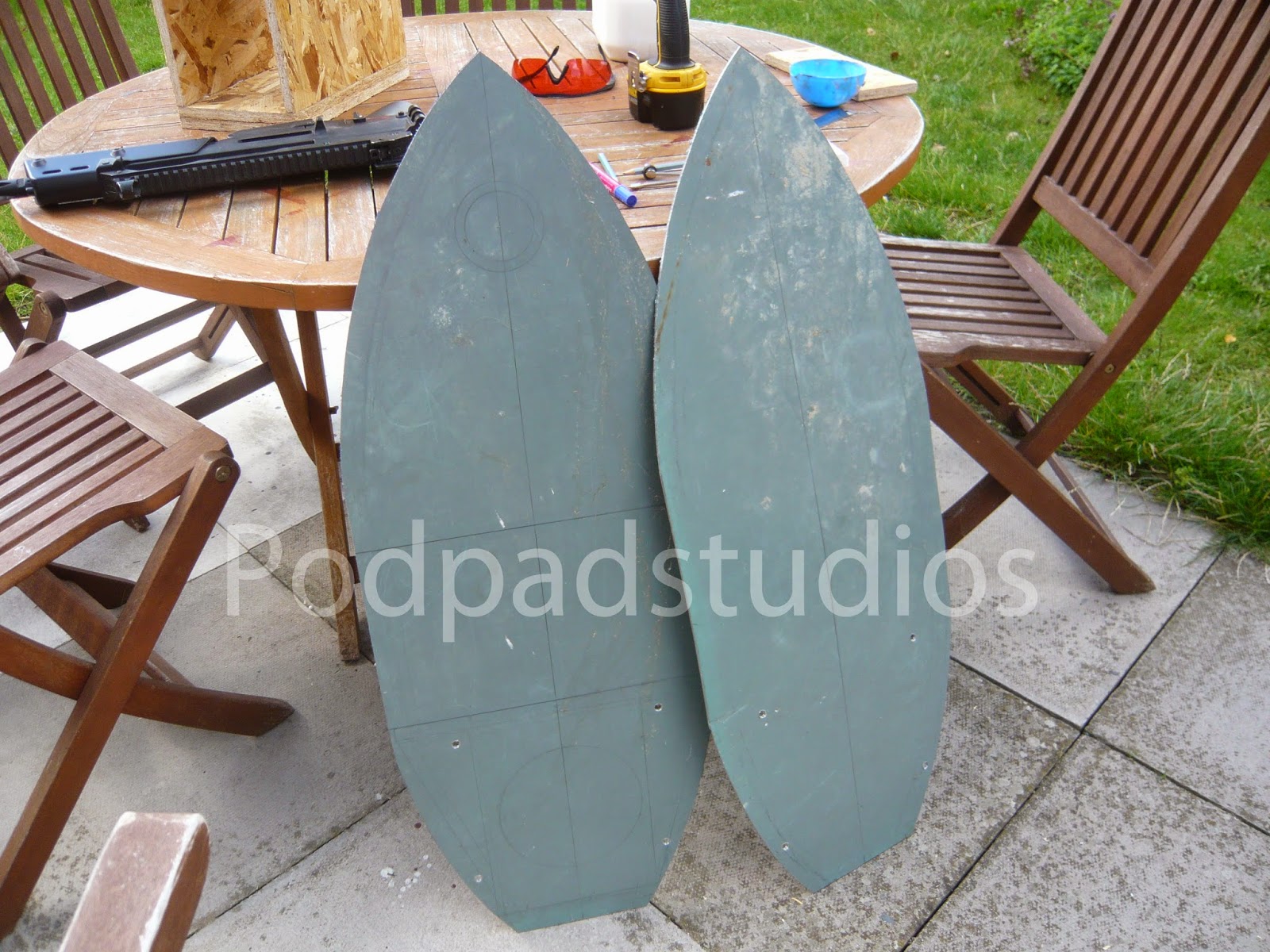 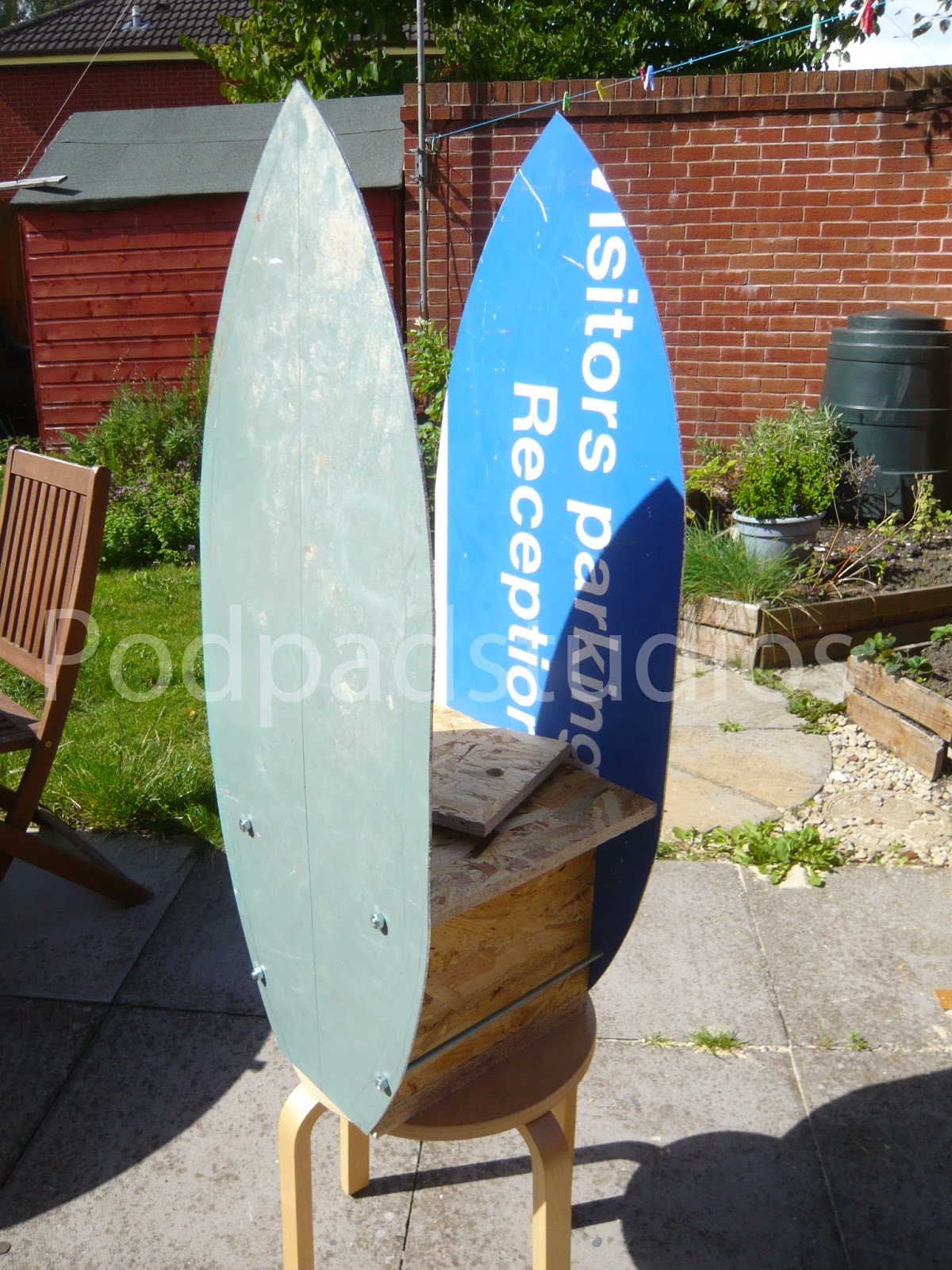 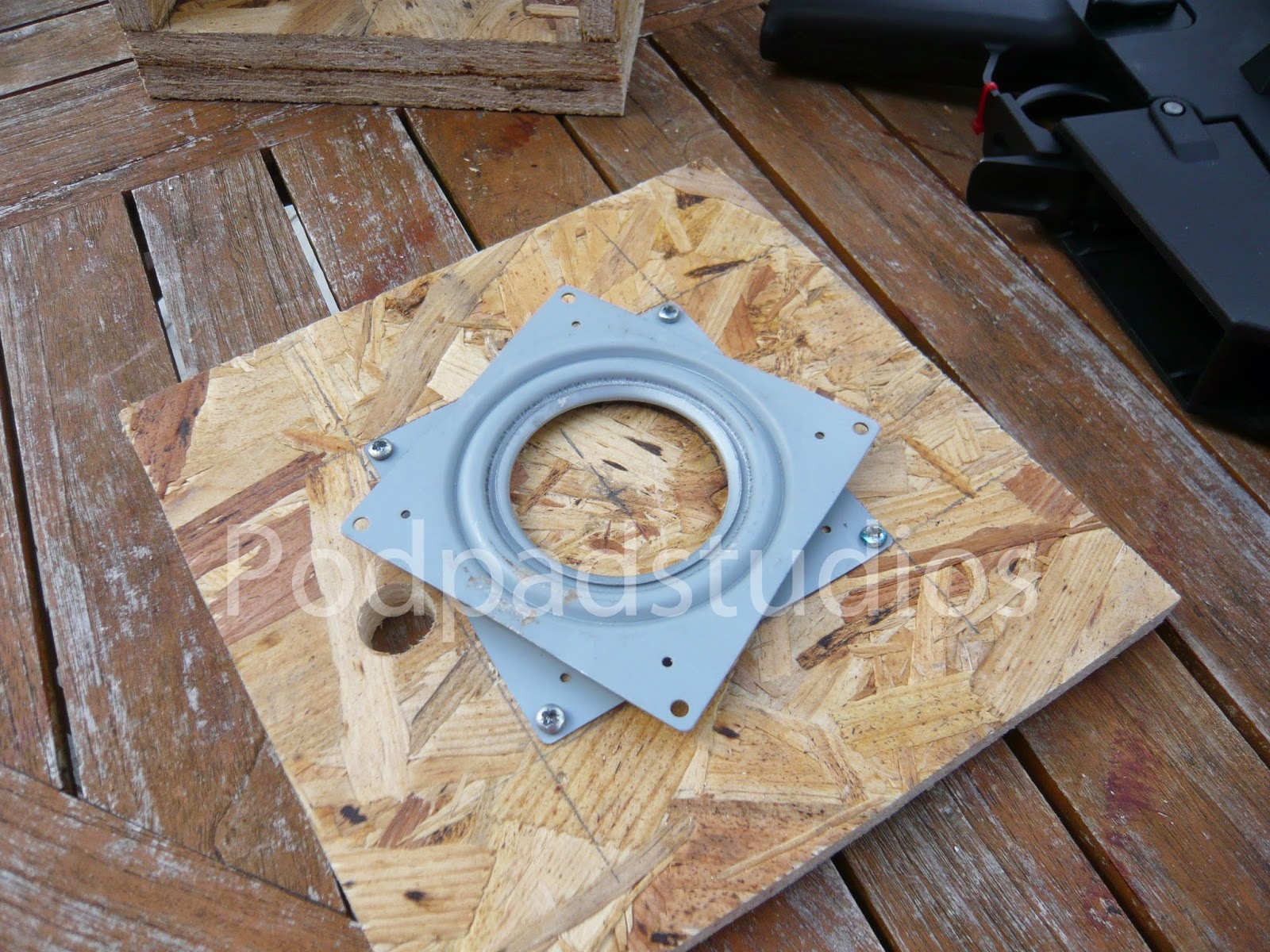 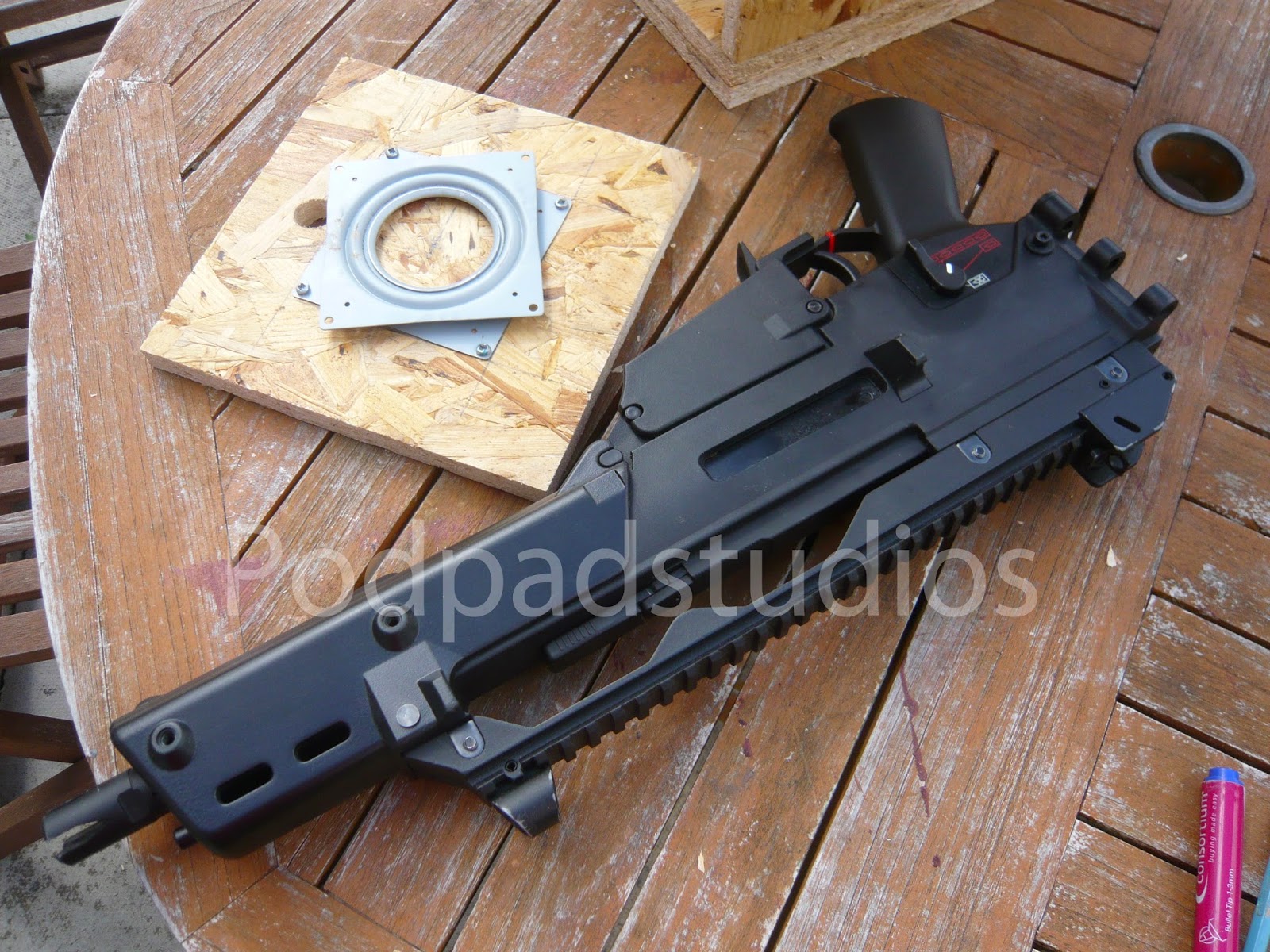 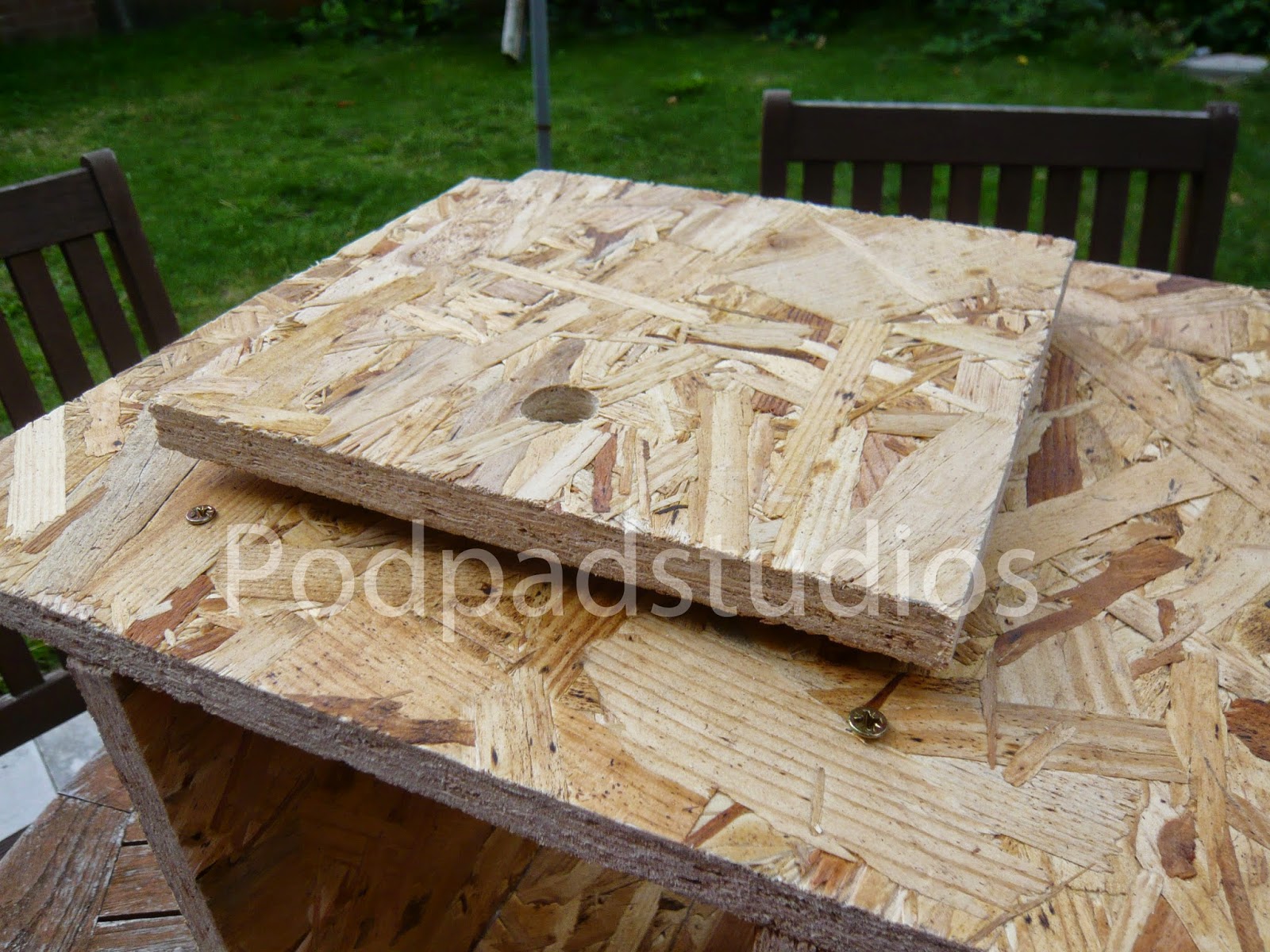 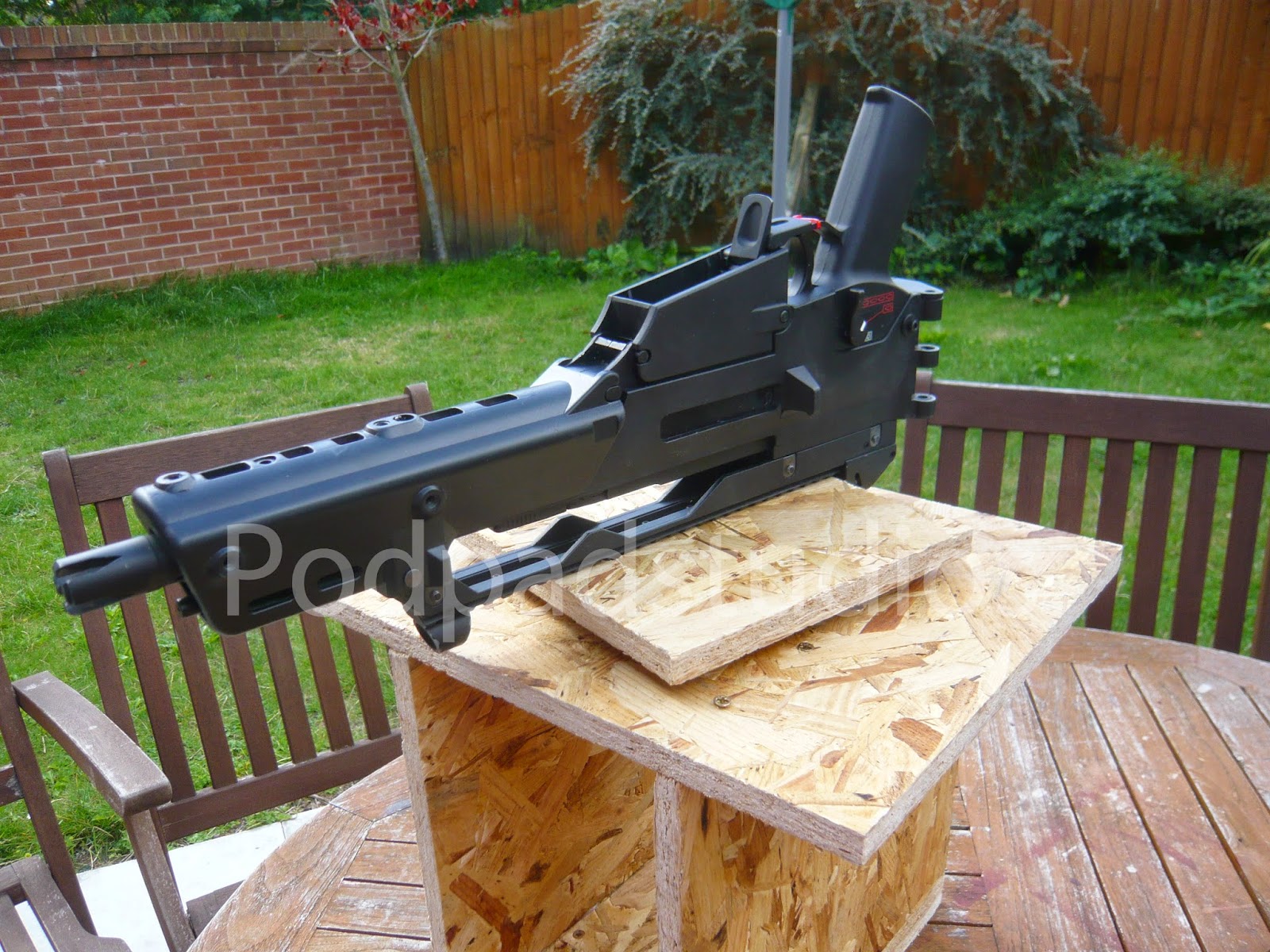 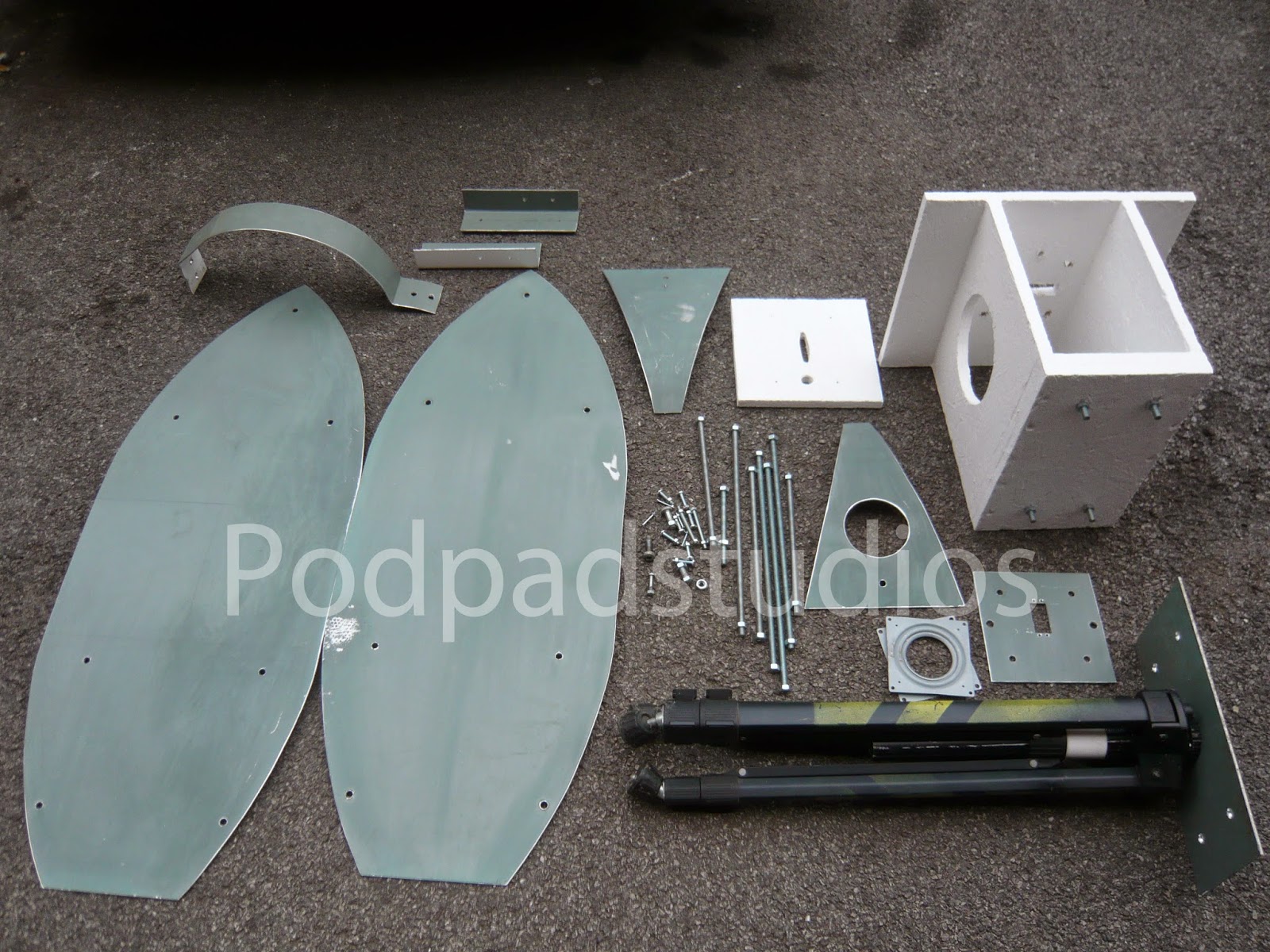 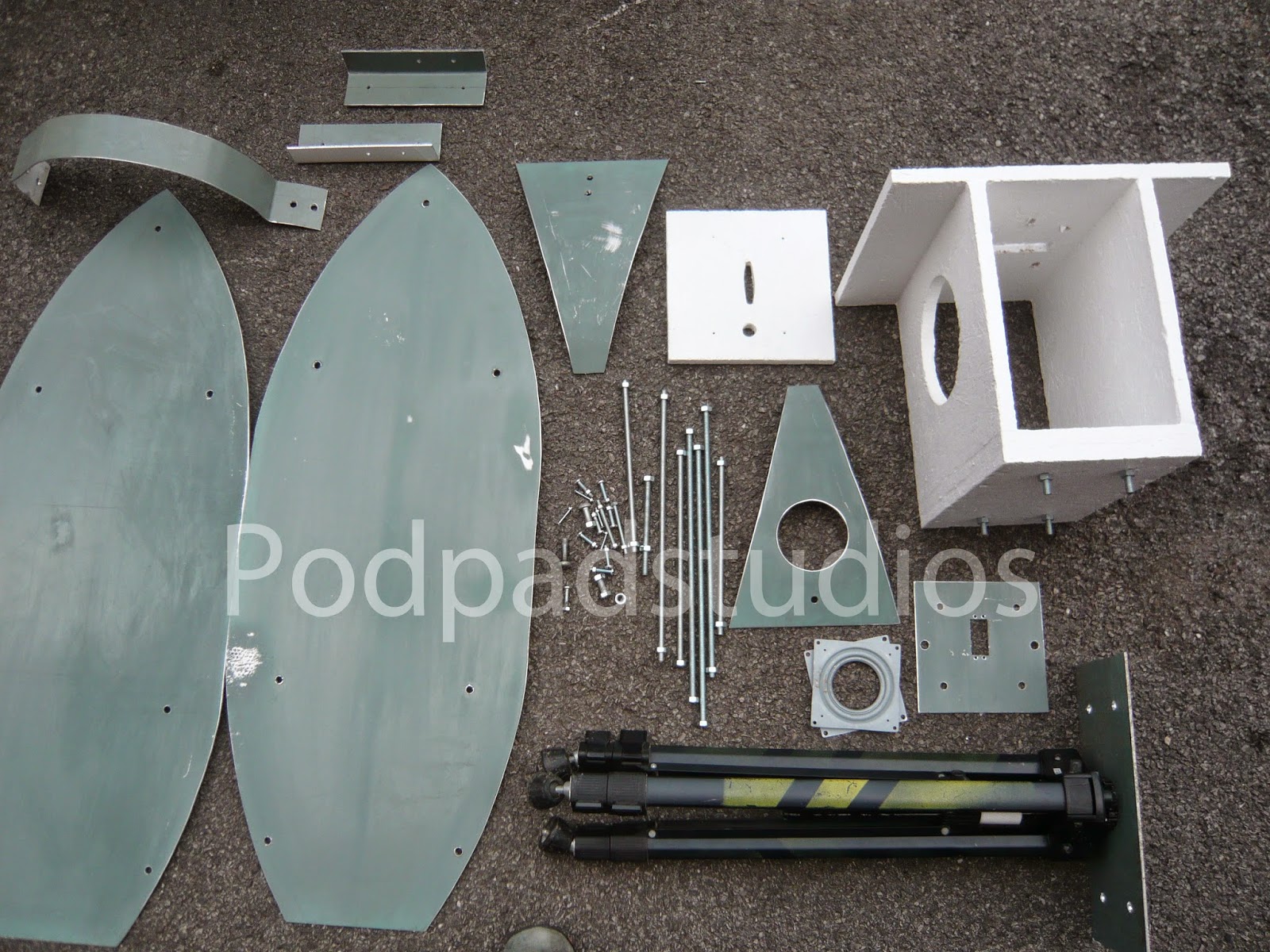 Old camera tripod will form the base of the gun for now. 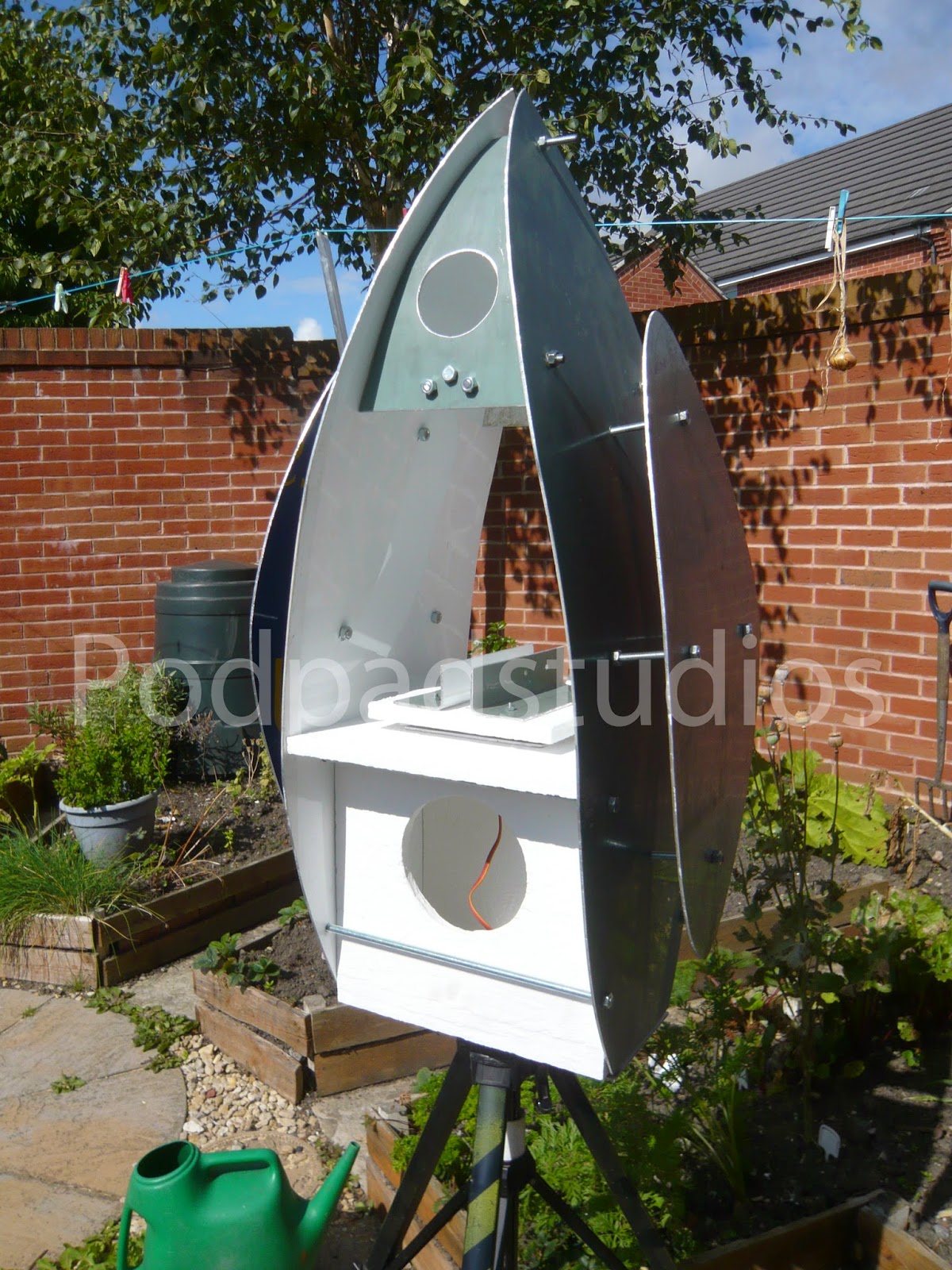 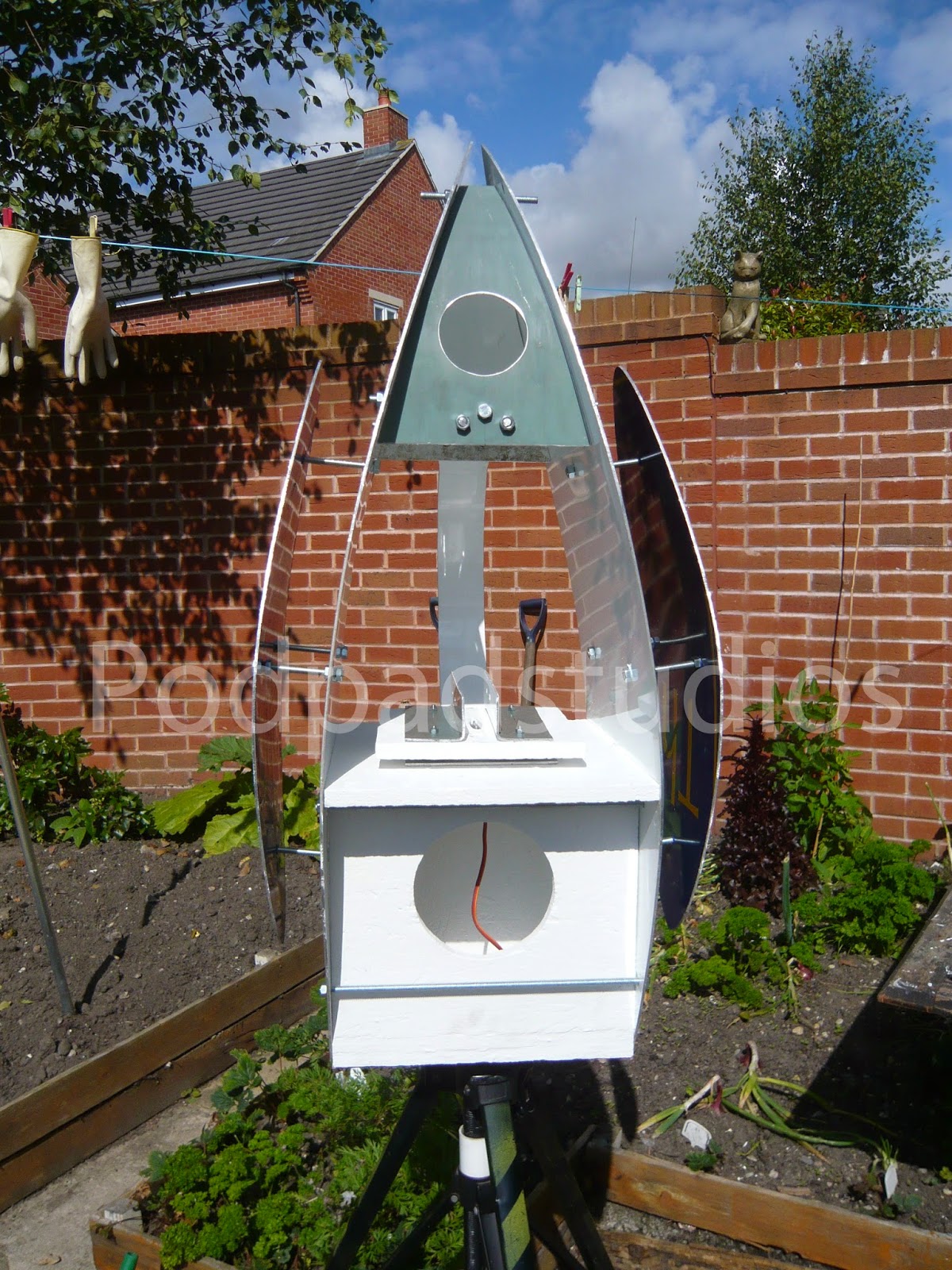 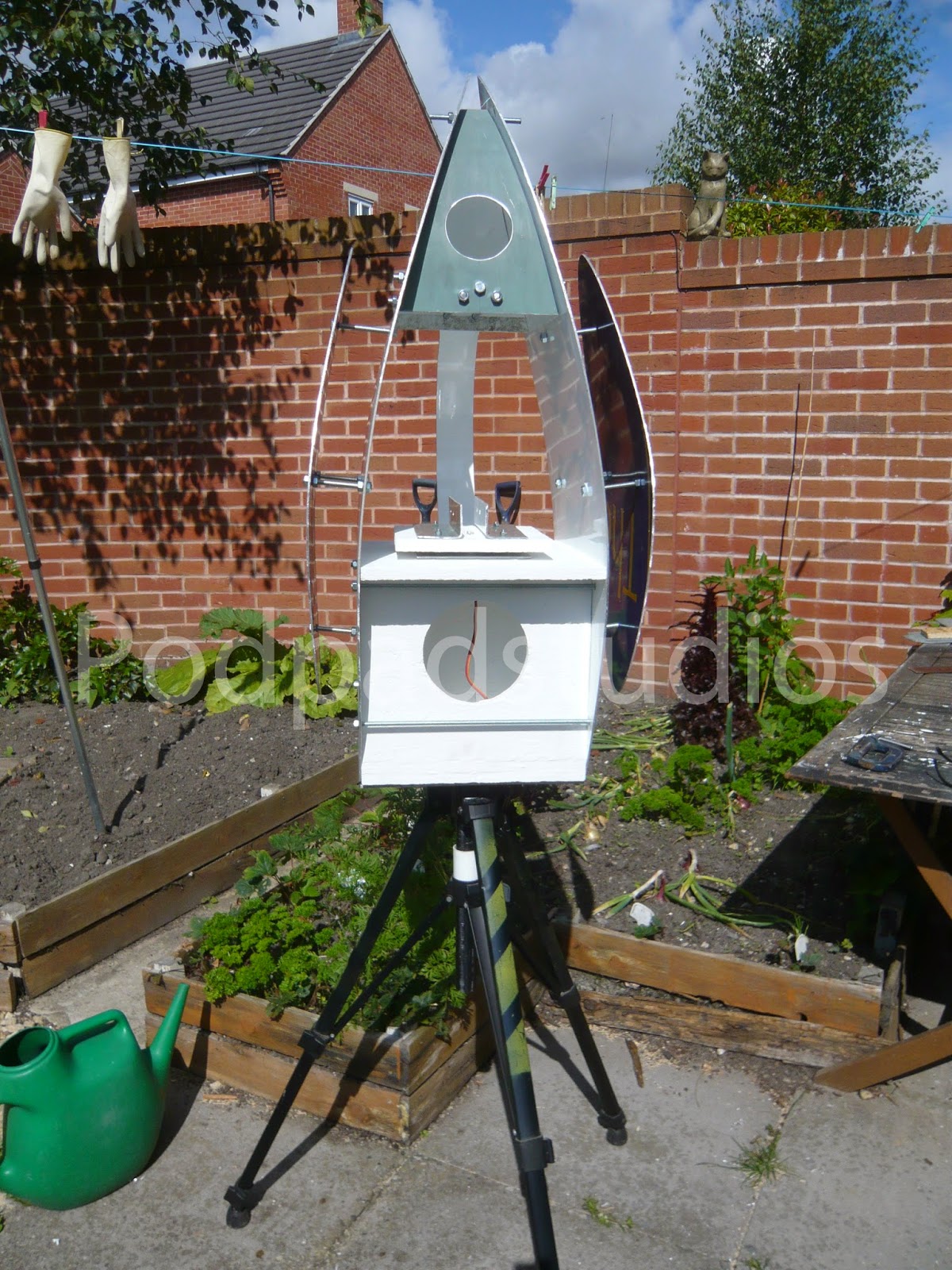 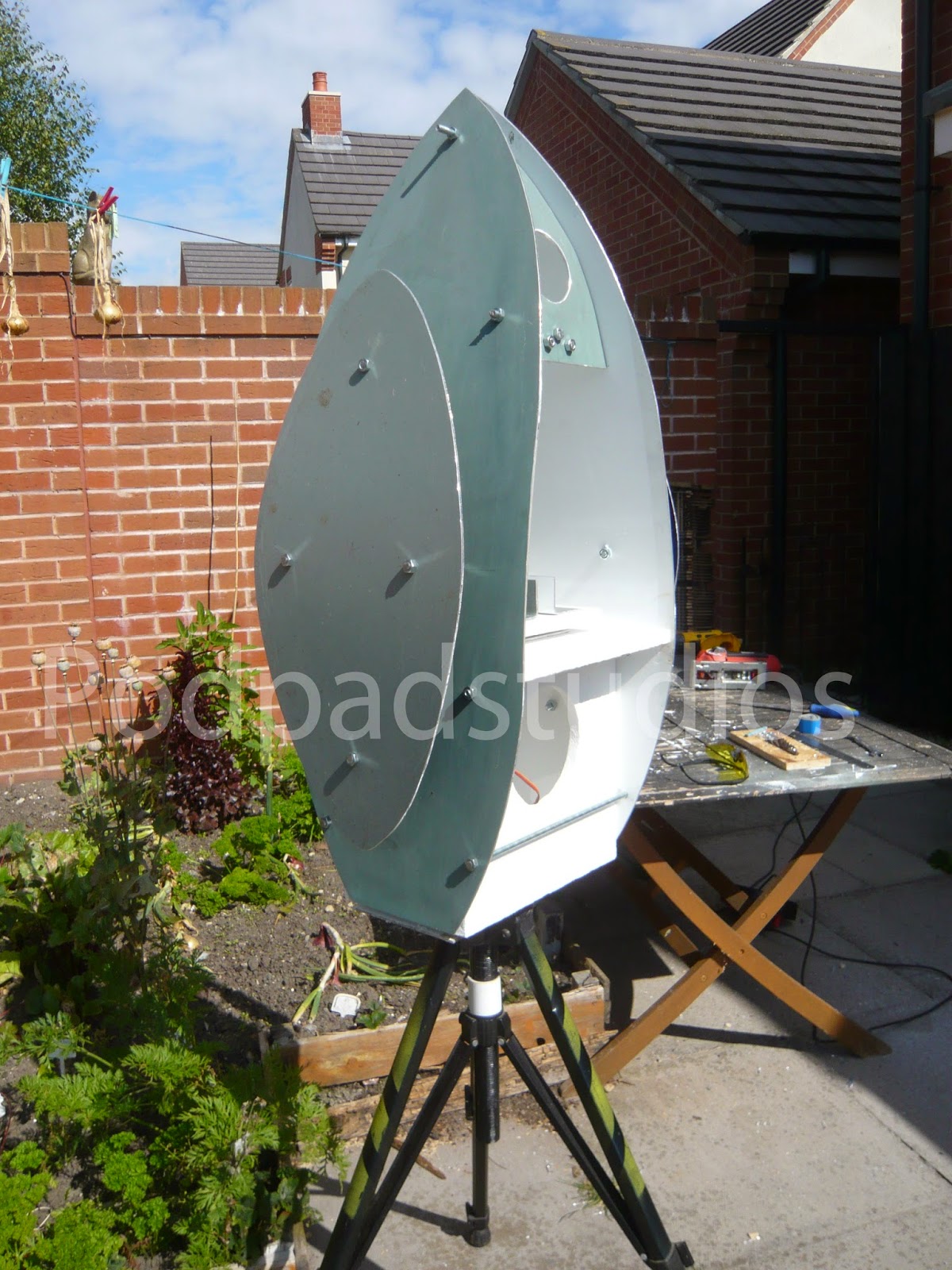 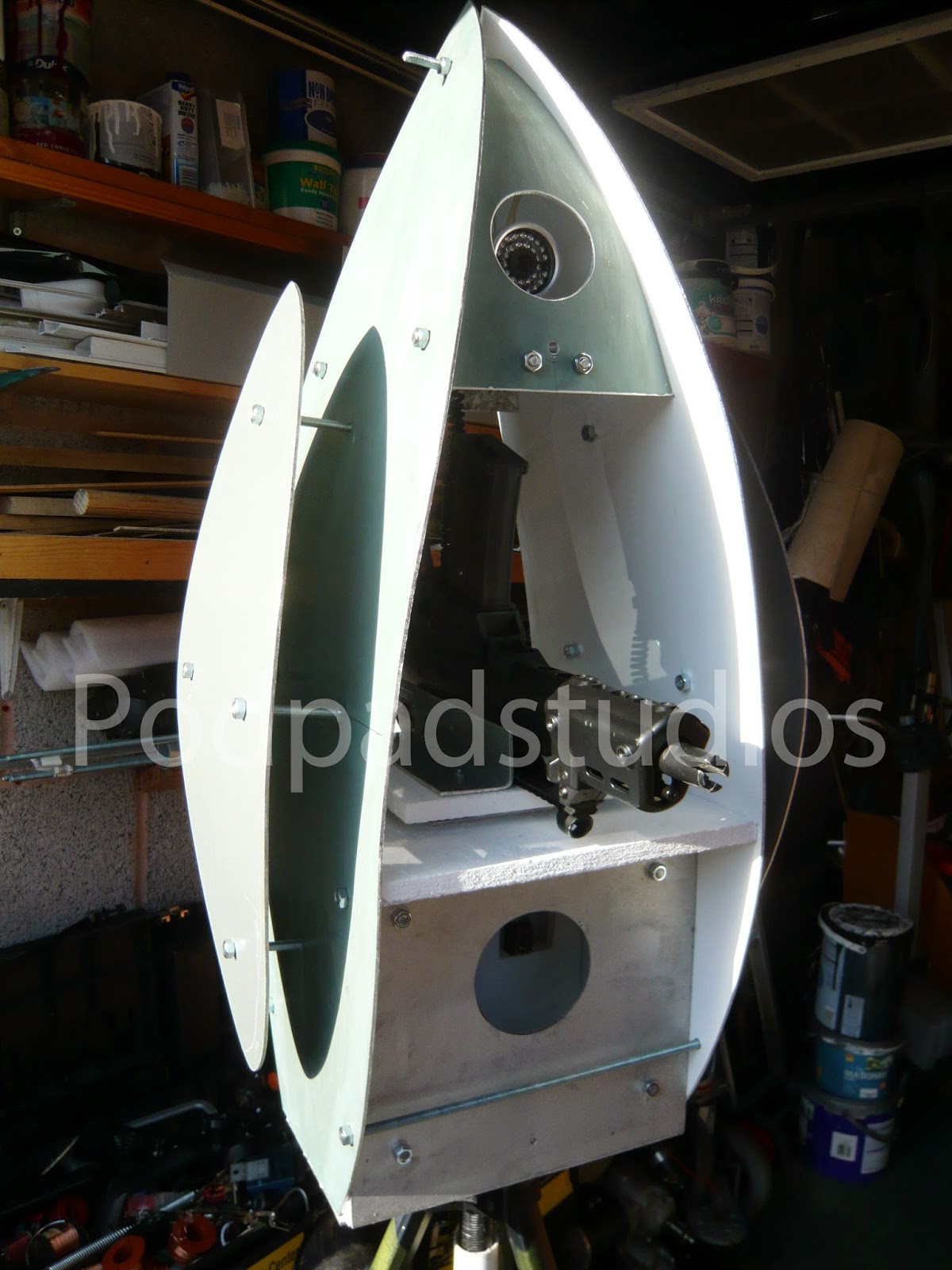 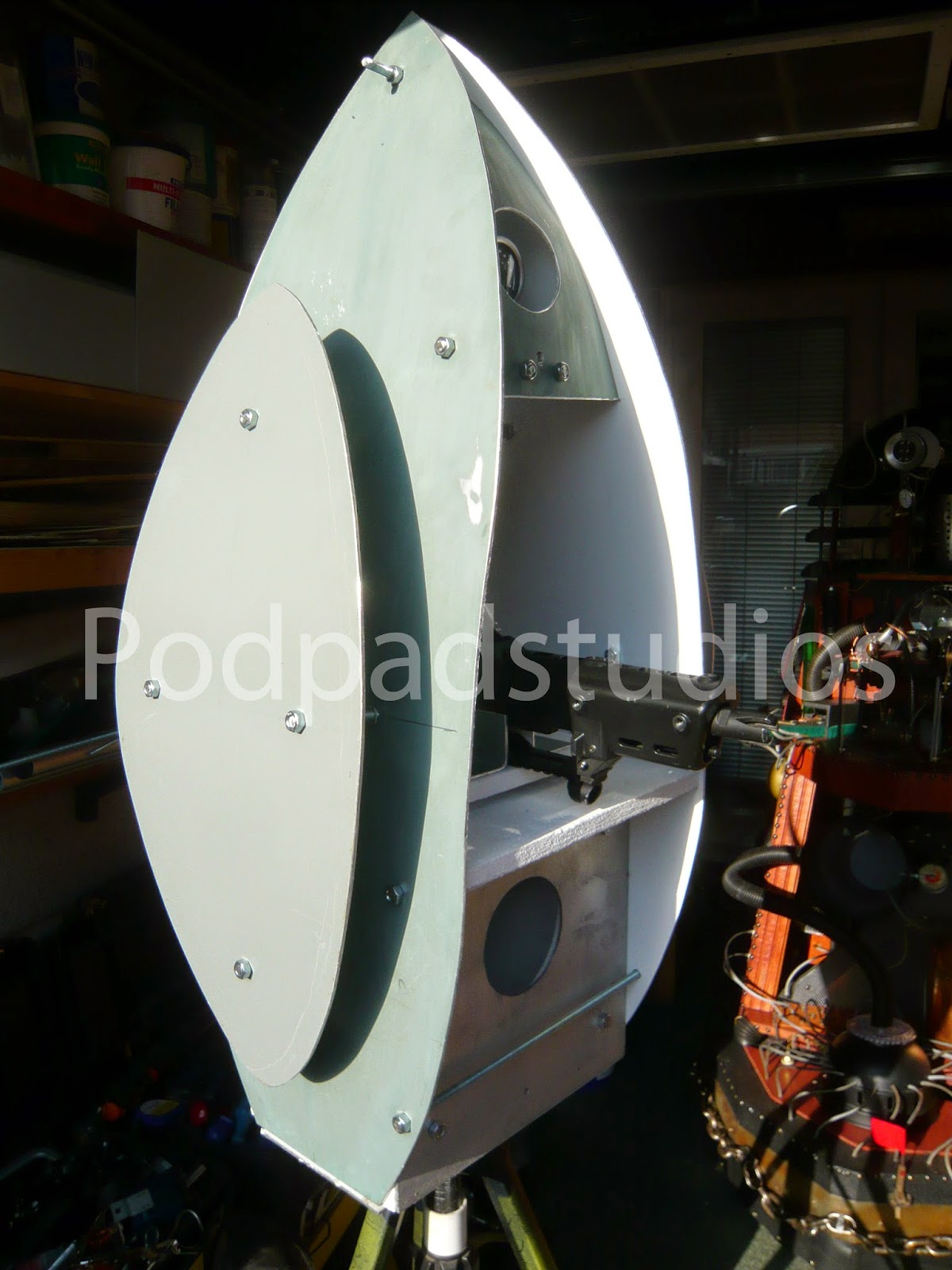 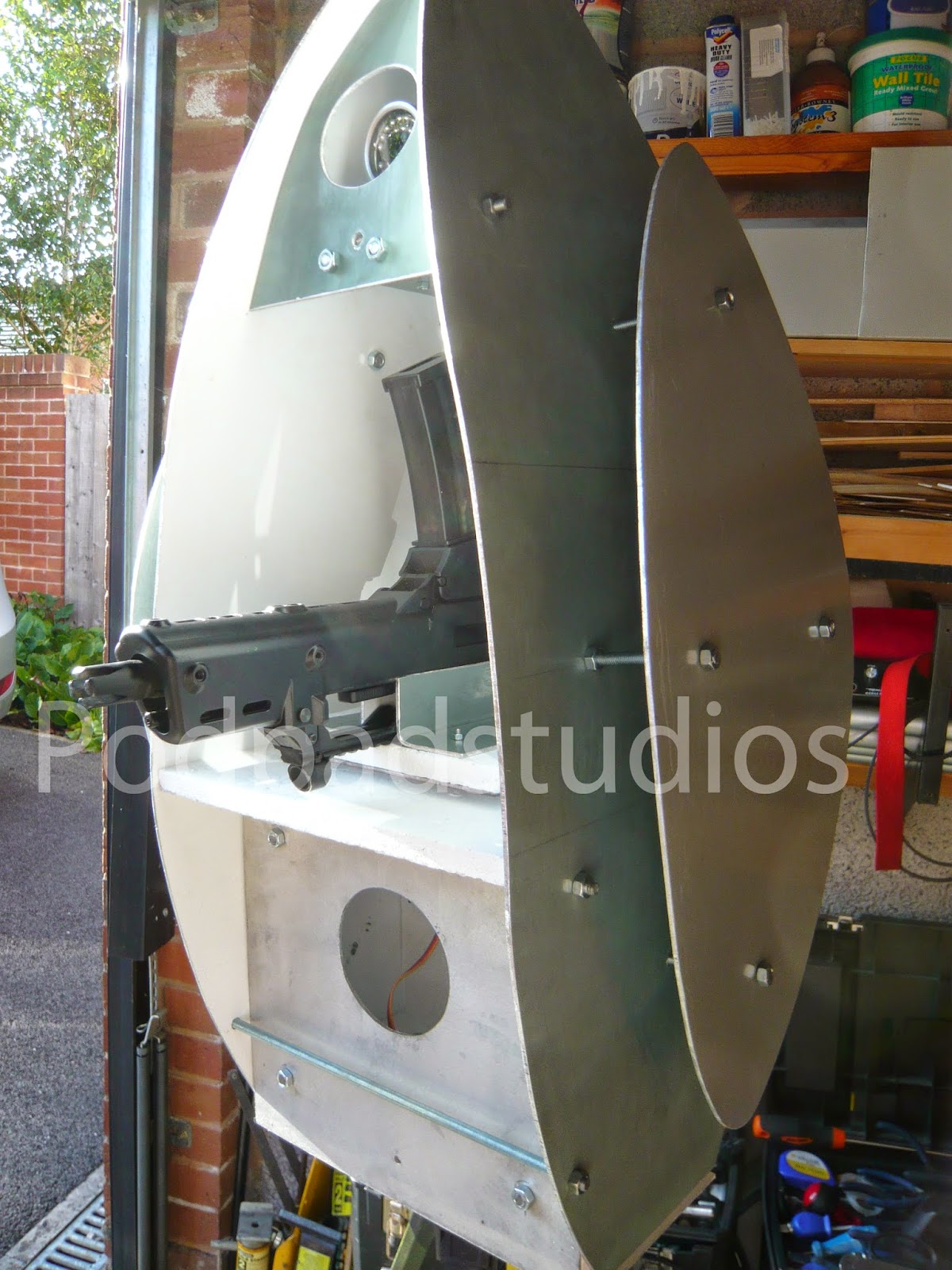 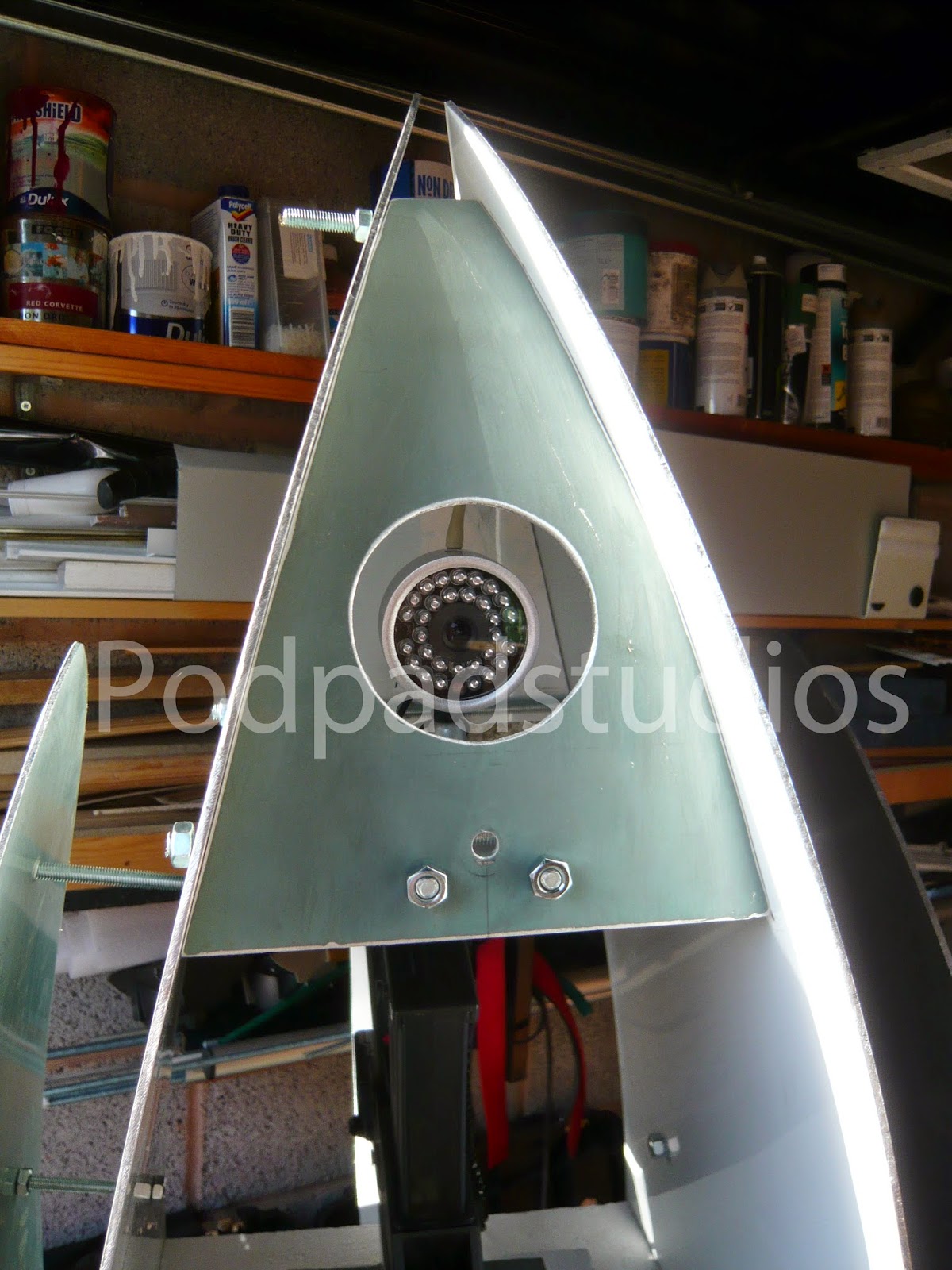 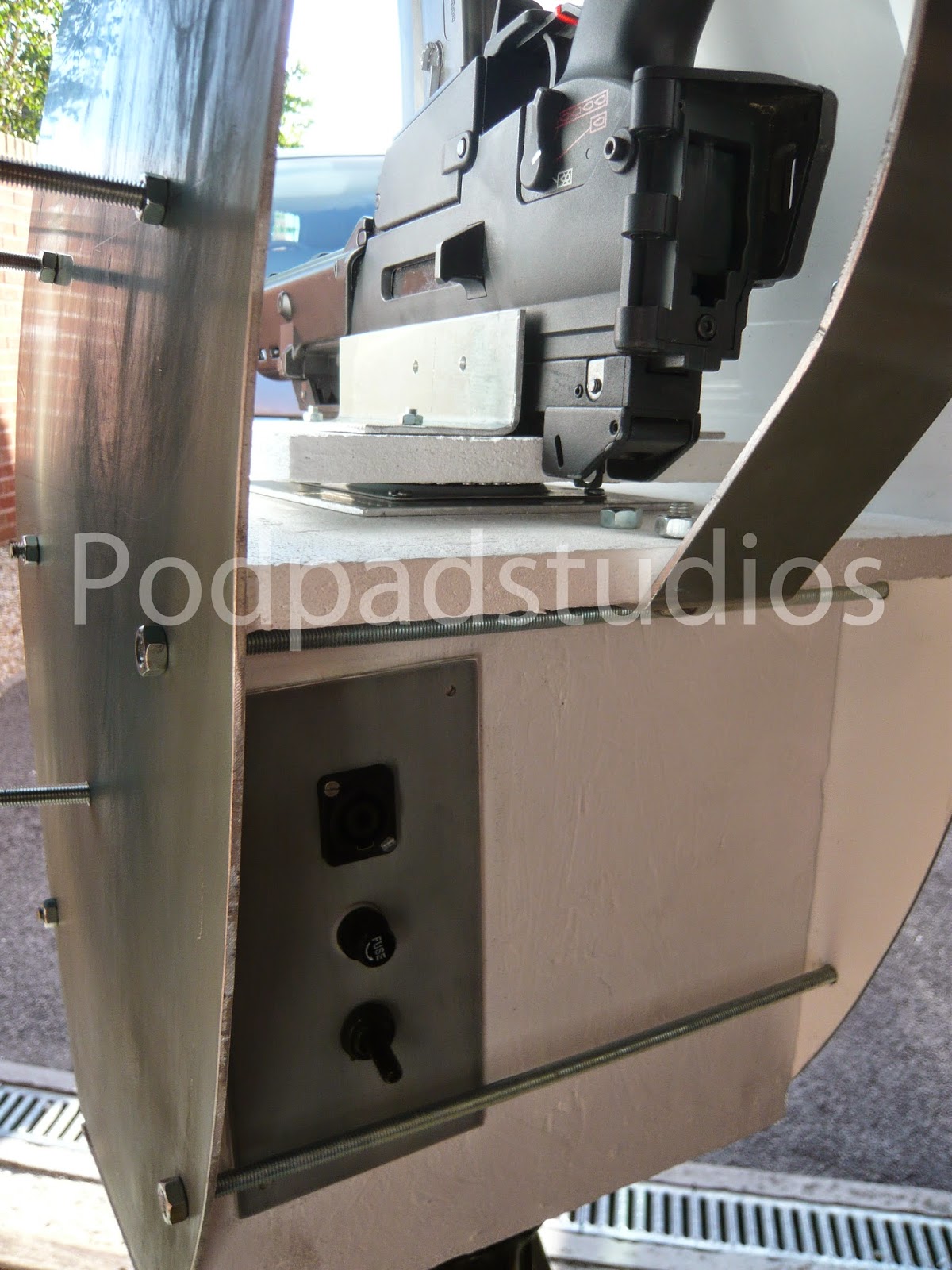 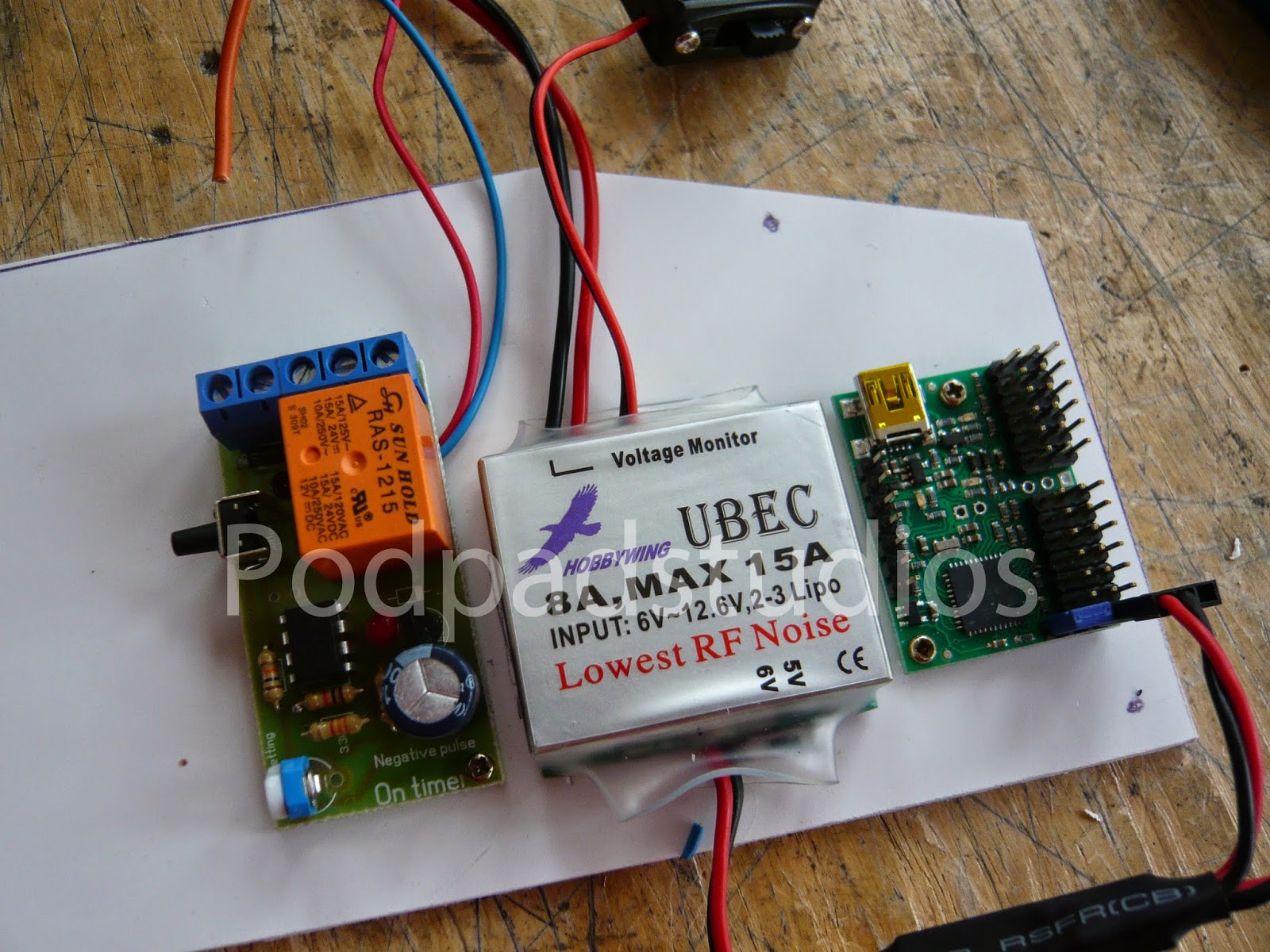 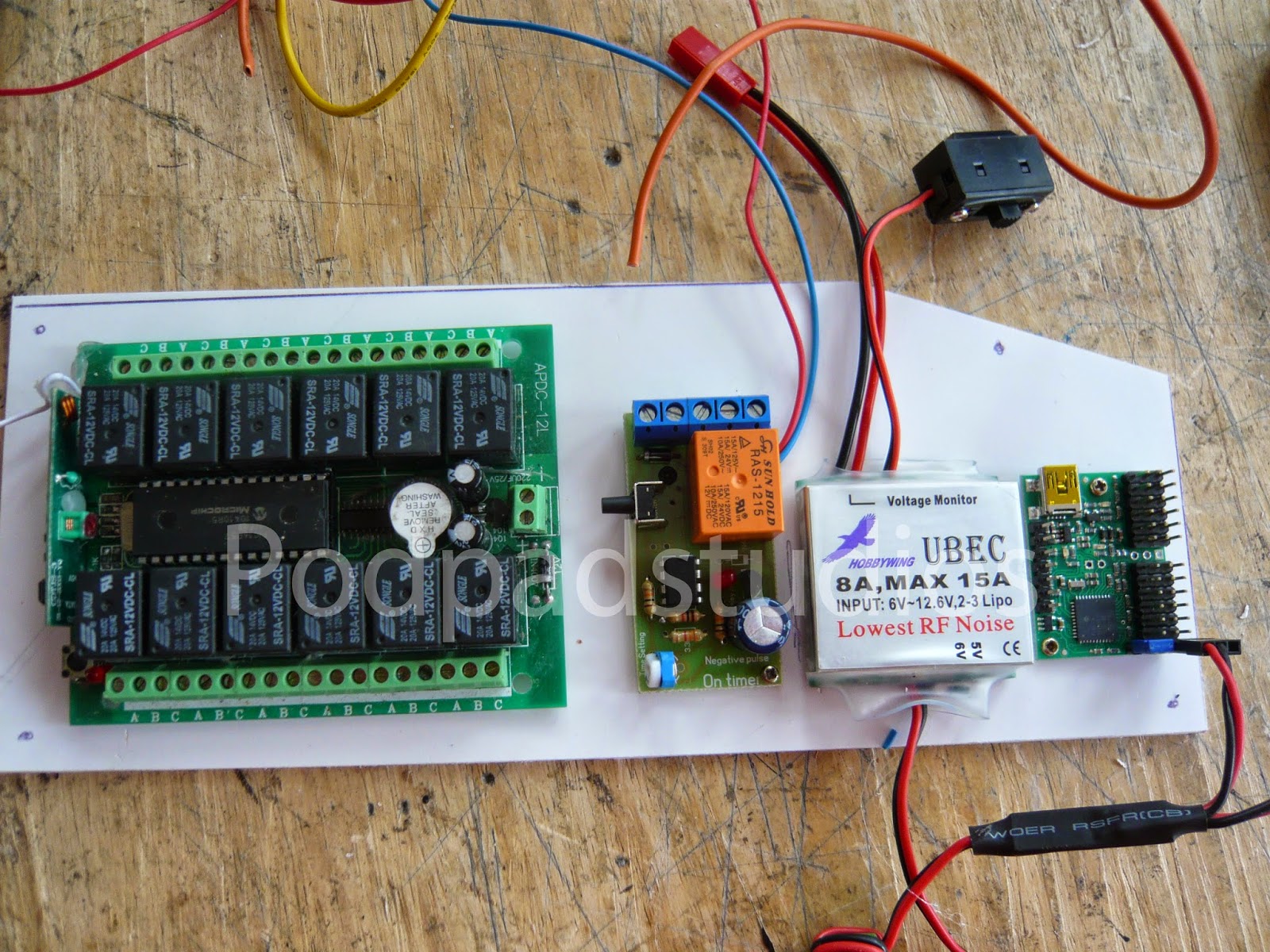 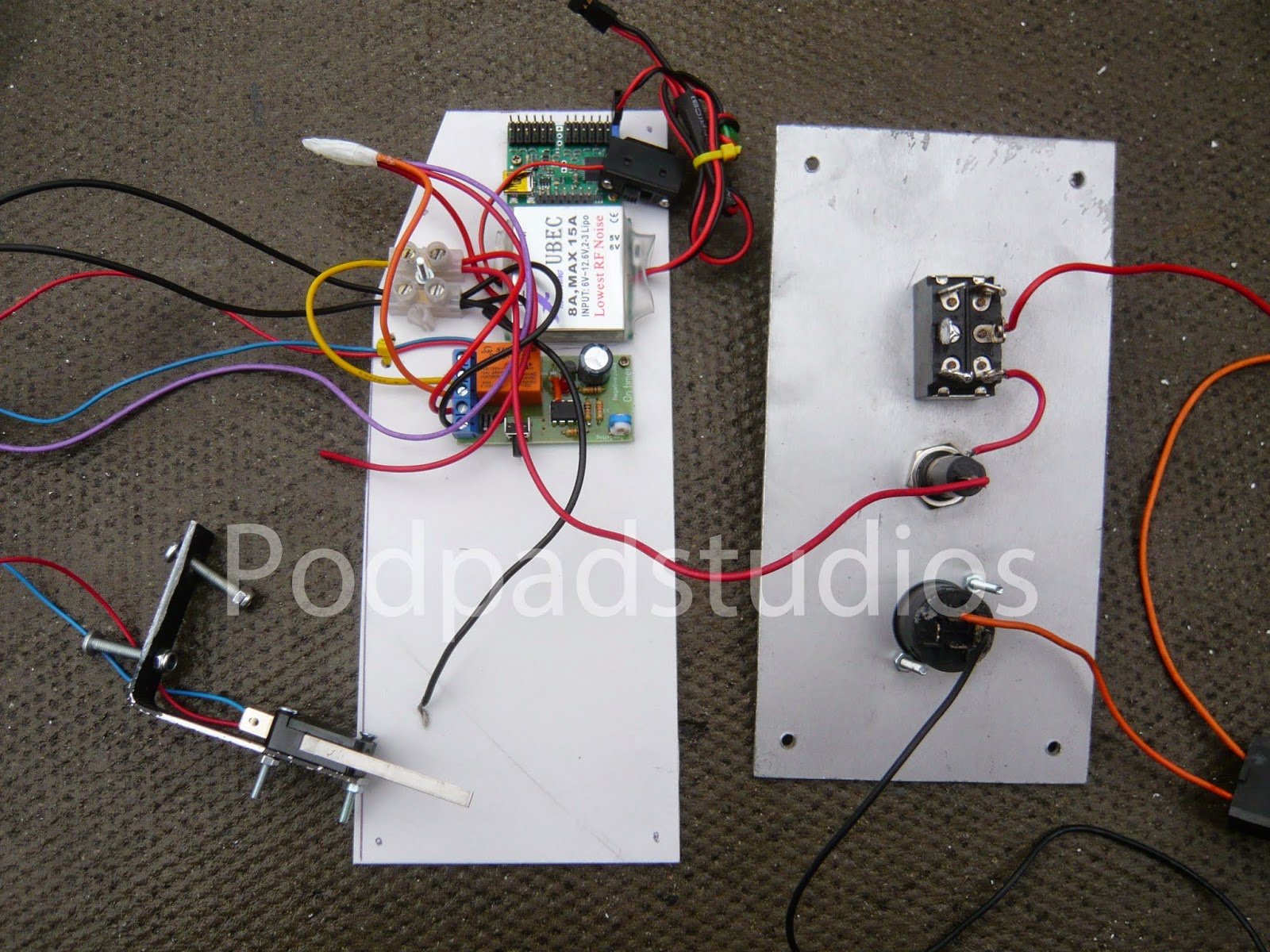 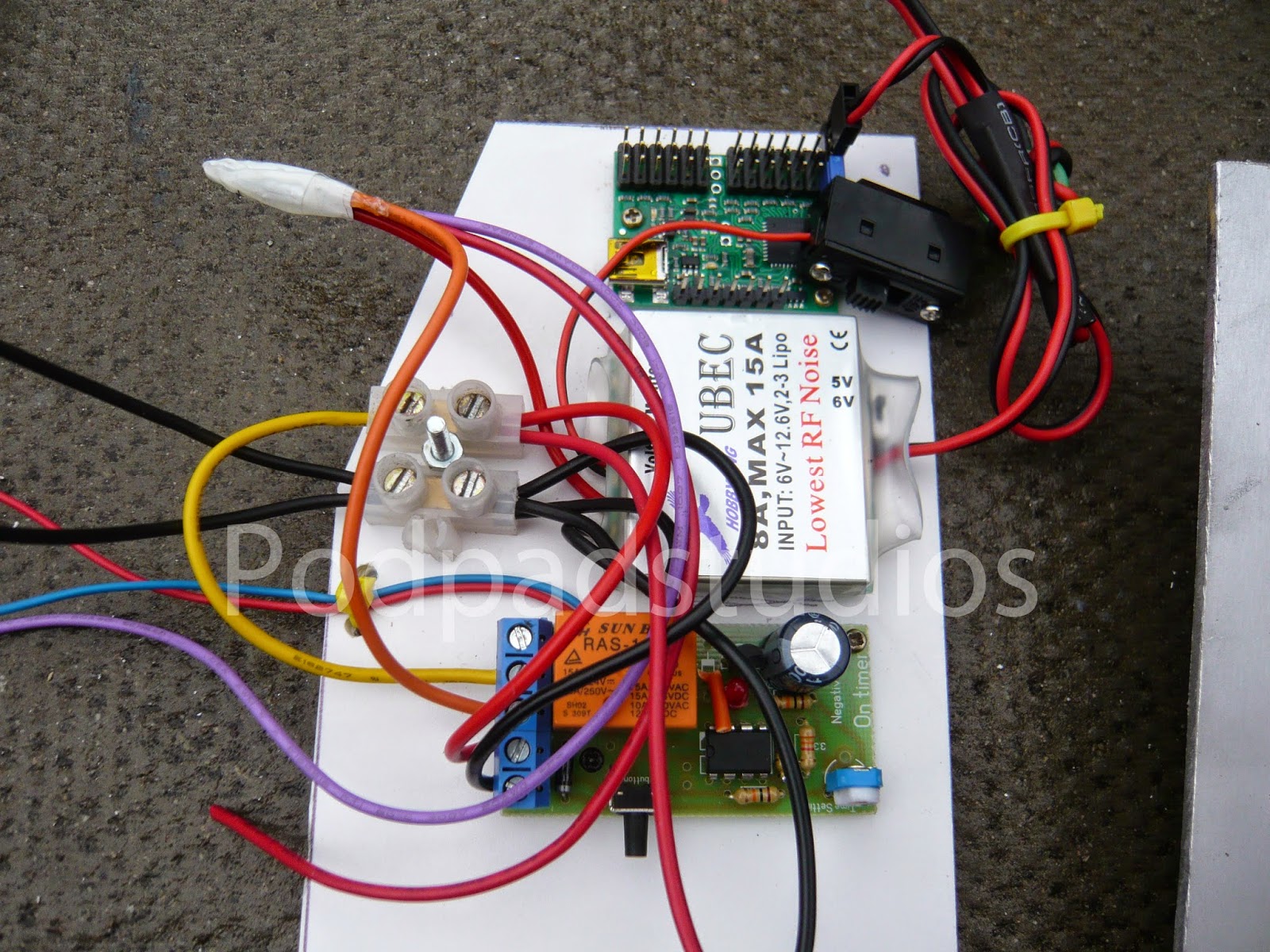 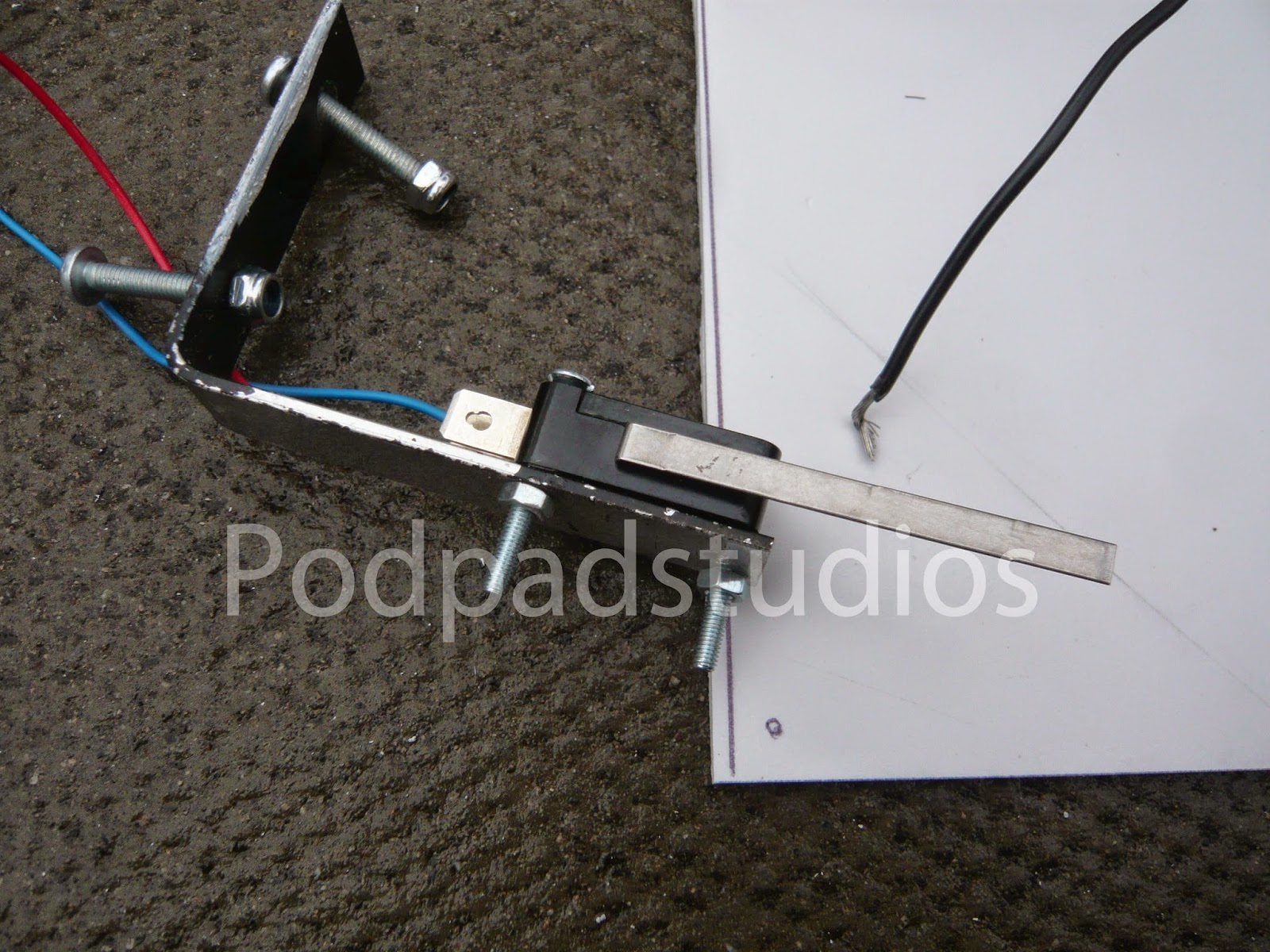 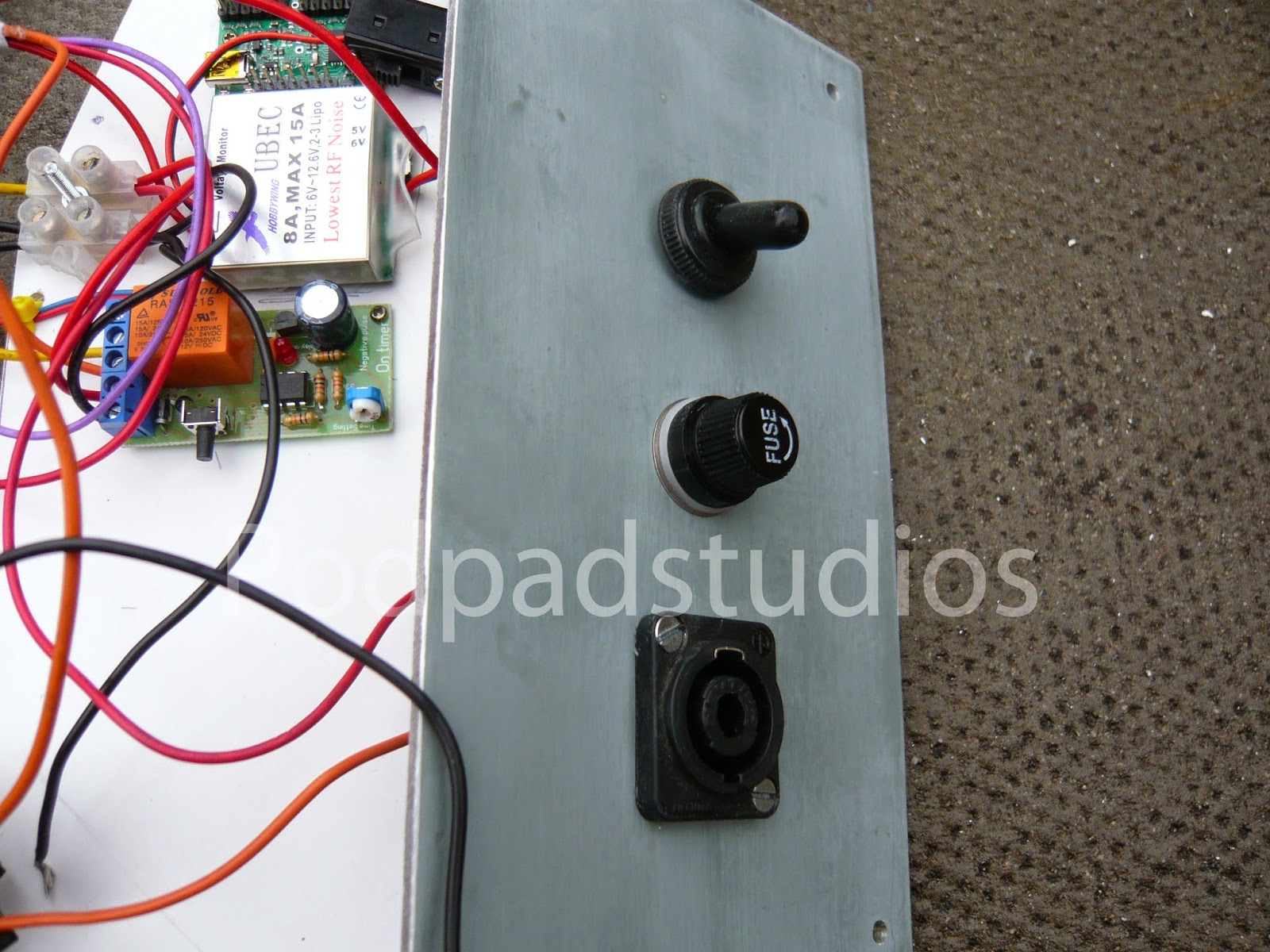 Starting to build the electronics.
Compared to building Robots these electronics are very simple.
Pololu Maestro takes care of the servo tracking. The servo has 13kg of torque so should be fine moving the gun left and right.
15Amp UBEC provides the power to the Maestro board and camera at 6v.
A small timer relay connected to the hit switch controls the timer shut down of the gun if hit.
Last of all is an RF Wireless switch used to remote trigger the gun and other things as I add them in future. Everything runs through a fuse and switch and is powered from a small 5Amp 12v SLA battery. If I need more power I will add a larger battery at a later date.
The speak on connector is the charge socket for the battery.
Posted by Podpadstudios at 09:49